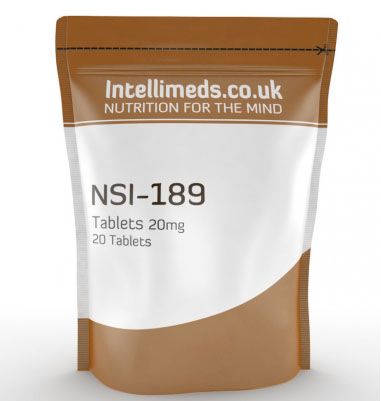 This nootropic is very interesting, mainly because of the fact that it's currently in active study testing by a company called Neuralstem, Inc. Our review here will focus on the most important thing that you need to know about NSI-189 and decide if this is something that you want to add to your nootropic stack in the future.
(4-Benzylpiperazin-1-yl)-[2-(3-methylbutylamino)pyridin-3-yl]methanone
We will refer to it as NSI-189 though just because of simplicity. Taking a look at its chemical structure won't mean much to you unless you're a chemist, but in the case that you are, well here it is:
C22H30N4O
Let's get to the common language, the one that most of us can understand. Beyond all the science lays the question, what really is this substance NSI-189?
Research is being financed by both DARPA and NIH, so this substance called NSI-189 is actually an experimental drug and it is absolutely not available to the public, yet. In case you don't know, DARPA stands for Defense Advanced Research Projects Agency (We have the internet because of this organization) and NIH is National Institutes of Health.
So this is a huge drug that's being actively researched in efforts to come up with a solution to treat major depressive disorder. Among other things, DARPA plans on using this drug to provide soldiers in the field an easy and safe solution to stay awake and boost their concentration levels.
As we write this now, NSI-189 is a drug that hasn't been scheduled and isn't available to the public. Yet there are merchants selling this chemical online. They are operating illegally, and the patent owner i.e. Neuralstem, Inc is actively shutting down merchants selling this drug.
Hopefully we will be able to experience what NSI-189 has to offer, but until then it is recommended that we don't pursue this drug and buy it online.

A big-ass text about my NSI-189 and Sulbutiamine cycles with some interesting albeit disappointing results.

NSI-189, first impressions. "The good, the bad and the ugly." (One week in) The good: Intense positive emotions, elevated mood, increased verbal fluency,