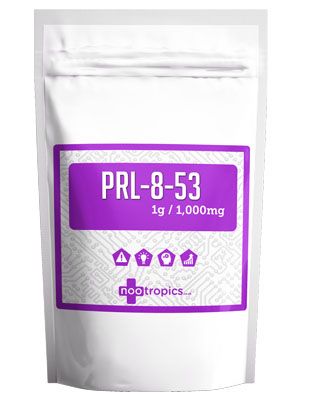 This drug is a memory and learning enhancement nootropic and all of the research results suggest that it's incredibly safe for usage. There have been extensive research periods on rodents, where it was evaluated that usage results in an increase for learning interest in rats. Human studies have been processed as well! Internet is full of live PRL 8-53 user reviews. One can read of their experience at the topics above. Also you can find useful information about PRL 8-53 stacks and it's effects.
The study was done on participants whose job was to memorize a specific set of twelve ordered words. First, the participants received either a placebo or PRL-8-53 and afterwards they took the memory test. The research went on in three stages and the test was repeated on every stage. The first stage was right after taking the drug/placebo, followed by another test the very next day and finished in the last stage four days after initially taking the drug.
The results showed that there was a significant increase in short term memory, but only for people that initially has really bad results on the test. The others, which performed nominally, didn't receive any memory related enhancements.
Although there were no negative side-effects experience recorded for the duration of the research periods, it isn't recommended to use PRL-8-53 on a daily basis. The only source of research in the owner of the drug, and although the results are probably completely valid, it is much safer to stay away from this substance.

Bromantane vs PRL: what is better for memory and mental energy?

Trying to pick the overall best for cognitive, memory, and mental energy... Bromantane or Prl

PRL-8-53 plus Bacopa for memory. How to potentiate PRL effects?

Hi everyone, I'm thinking about trying some PRL-8-53 plus Bacopa ...

anybody used prl 8-53 for memory and what dosage,how long ...